Pursuing Patience in the Pain of Progress 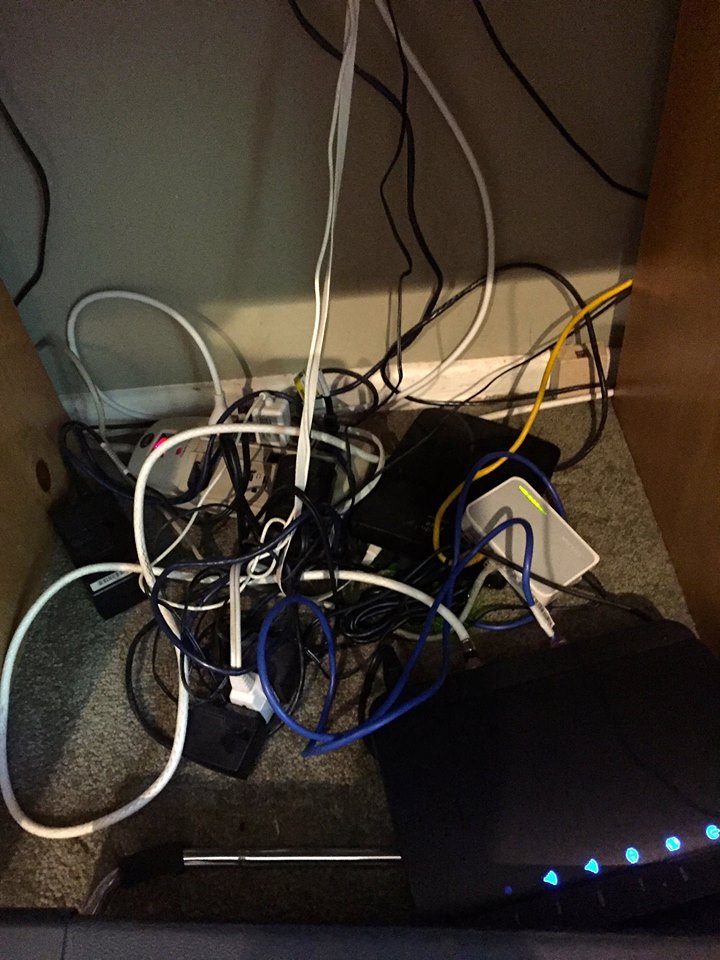 Under my desk: Medusa on a bad hair day

I woke up the other morning to the sounds of battle.  My husband was in hand-to-hand combat with the cordless phone stuck in the trenches behind the bedside table.  They say “cordless”, umhum.  The cords and attaching wires to the wall socket were winning as he rattled them in a tug of war that ended with a triumphant jerk.

“I wish life were simple again.”  He snorted.  “Too much technology!” and he was off to the bathroom to dress for work.

I frequently long for the days of the highly efficient on/off button, two simple functions.  What bliss!  And a telephone was a sturdy instrument with substance in your hand.  You never had to worry about microwaves scrambling your brain either.

When Bob brought the SONOS home, I was silently kicking and screaming like a baby.  “Not another thing I have to learn how to use that will break down and force me to call the dreaded, dare I say the name aloud, TECHNICAL SUPPORT.”

I’d rather clean the dog’s poo in the yard than call tech support.  After running the gauntlet of voice commands, they put you on hold for half the day.  When they do answer they speak in a foreign language, and they frequently disconnect you just for fun.  Like Parcheesi from Hell you have to go all the way back to the start and repeat the process.

The worst is when they tell you to find the computer cord connected to the such and such, by the so and so.  Never a good thing.  The murky area under my desk looks like Medusa on a bad hair day.  Plus, it’s dark down there and I’m blind without glasses for close reading.  My younger daughter has set up pretty much everything for me, so I always feel like the loser on ARE YOU SMARTER THAN A FIFTH GRADER? when the tekkie asks me questions.  So humiliating.

Yet, once I have bitten the bullet of education and surrendered to whatever the new device or program is, I am typically more satisfied.  I have made peace with my Sonos these last few years since we installed the “boost” in the dining room.   The music is great, and I do enjoy the lack of tumbling CD’s in their breaking plastic cases.

You can’t stop progress, and realistically I wouldn’t want to.  It’s a matter of choosing what I want and being okay within those limits.  Feeling overwhelmed can be a choice.  Sometimes I forget that.

“Fools fold their hands and ruin themselves. Better one handful with tranquility than two handfuls with toil and chasing after the wind.”